In this article history of origin of bench firing, its development and as it formed in firing at the trench stand (TRAP) is considered

The shooting and bench sport is a firing from smooth-bore guns in fraction on quickly flying targets.

It conducts the history from the remote past. Fans of firing began to integrate in circles, clubs, societies, and in 1907 the International shooting union (UIT) which has integrated different types of bullet firing has been created. In 1929 the countries where bench firing was cultivated, have integrated in the International federation of firing from hunting guns (FITASK). But in 1947 bench firing came out FITASK and has joined UIT. Now all disciplines on bullet and bench firing are included into UIT, and official international competitions including the Olympic Games, take place by rules UIT and under its control. Nevertheless FITASK exists and regularly holds the World Cups and Europe on sedimentary firing and a sporting.

From the moment of the invention of firearms of people aimed to learn to shoot straight from it not only in fight, on hunting, but also in different competitions. Special color to competitions was given by firing from hunting guns in fraction on the fast-flying purposes. The first competitions in firing from hunting smooth-bore shot guns have taken place in England in 1793. It was fired on the pigeons who are in special boxes (baskets) called by cages in 19 m from the shooter. At the command of the shooting waiter (on modern — the operator) who was located behind the shooter pulled a cord and threw out a pigeon from a cage. But was to wound or kill a bird insufficiently, under the terms of competitions she had to fall not further 100 yards (91 m) from the shooter. This type of firing was close to firing on hunting. Its began to call “sedimentary firing”, and shot guns with sharp and compact fight “sedimentary”.

Protests of defenders of animals and birds against such inhumane sport have forced fans of sedimentary firing to replace live targets with different objects. As, for example, the glass spheres with a diameter of 64 mm filled with smoke, feathers of birds, paint; for their throwing special devices have been created. But targets were poor quality and often burst, them it was badly visible, and quite often grains ricocheted from a smooth surface at hit in a target by the region of a talus. In 1880 the shooter Mr. Ligovski (the USA, Cincinnati) has invented clay targets plateaus of a flat profile (so they are called and today) and the first throwing device machine. Platforms where throwing machines were installed, began to be called stands from where the name “bench firing” has gone. In the annals of the Russian history the first mentioning of firing at pigeons has been noted in 1737 during reign of the empress Anna Ioannovna. She also was a skillful shooter from the gun and onions. In “The St. Petersburg sheets” of that time firing at pigeons which was carried out at court of the empress was mentioned. At the same time expensive prizes were played.

In the annals of the Russian history the first mentioning of firing at pigeons has been noted in 1737 during reign of the empress Anna Ioannovna. She also was a skillful shooter from the gun and onions.

As throwing machines were installed in a trench, from here and the name the trench stand (“trap”) has gone. Competitions on bench firing, close to modern, began to be held since the end of the 19th century. Preference was given to firing at the trench stand, and in 1900 for the first time (for men) it has been included in the program of 2 Olympic Games where the rank of the first Olympic champion was won by Frenchman Roger de Barbarin. In 1910 spouses O. and Z.Denisovich have organized a circle of bench firing, and in the housing estate of Lipovo near St. Petersburg the first firing practice at plateaus has been carried out. The Russian shooters have for the first time participated in the 5th Olympic Games of 1912 in Stockholm where the Rigan H.Blau has taken the 3rd place, having won a bronze medal, and the success has laid a way to domestic athletes to tops of world achievements. After the Olympic Games of 1912 bench firing was widely adopted more, it began to join in programs of the All-Russian Olympic Games. Competitions were held by the Olympic rules.

With establishment of the Soviet power in our country grandiose economic and cultural transformations have begun. Wide layers of fans of hunting and this type of firing began to join bench firing as to one of sports. The state in every possible way gave help shooting bench to sport, solving thereby and one of the major tasks of strengthening of defense capability of the country — training of the population for protection of the Fatherland.

The first competitions have begun to be held from 20th years of last century. So, in Moscow since 1923 “The big prize” of bench section of Mosgubsoyuz of hunters was played. A big event of that time was the 1st All-Union sports contest which program has included also bench firing. It passed in Moscow in 1928. In an individual competition the shooter N. Batyr, the commander of Red Army became the winner. Since then army athletes began to play the leading role in bench firing. In 1935 N. Filatushkin has struck 91 plateaus from 100 possible, having exceeded a record of the USSR. But the Great Patriotic War has burst, and many leading shooters have appeared on a first line of fight against aggressors. The experience, knowledge and skills acquired in bench firing at the fast-flying purposes promoted performance of complex fighting challenges.

Has not passed also years as volleys in honor of the Victory have died down, and the Central Office of Military and hunting society (BOO) has organized and has held another All-army competitions. And in competitions of 1947 the sailor of the Black Sea Fleet A. Sukharev has shown outstanding result at the trench stand, having struck 299 targets from 300 possible, having set three records of the USSR at once. The first post-war USSR championship of 1948 was held in Moscow. Team firing was won by army shooters. They also were the first in separate exercises of the program. V. Leontyev took priority in all exercises at the trench stand.

In 1949 the Soviet federations on bullet and bench firing have been admitted to the International shooting union (UIT), and in 1950 USSR national team debuted at the international competitions in Sofia. On the 15th Olympic 1952 in Helsinki the soldier Yu.Nikandrov was the 16th, but in 1955 he becomes the champion of Europe. And from this year the triumphal procession of the Soviet stendovik begins.

Roman Olympic Games. Big psychological tension was necessary to endure S. Kalinina (BOO) in fight for a bronze medal. On sports heat competitions in the World Cup of 1962 in Cairo where after numerous firefights of V. Zimenko has managed “pressurize” one of the leading Arab shooters were not smaller and became the owner of a gold medal.

Drama events at the 17th Tokyo Olympic Games developed. P. Senichev (BOO) has shown identical result with American U. Morris — 194 of 200 possible targets. Firefight. Pavel does by unexpectedly first shot a miss on a plateau, but, having been sure of its defeat, lowers the gun. Also sees that it continues flight. Without having become puzzled, P. Senichev from a vskidka has struck with the second shot almost falling target and has finished a series without miss that has allowed it to win silver. P. Senichev for successful performances at the international competitions receives ranks of the Honoured Master of Sports, honored trainer of the USSR and together with S. Kalinin “Honour Sign” is awarded the order.

At the Moscow Olympic Games-80 R. Yambulatov at the trench stand has taken the 2nd place, having struck 196 plateaus from 200. The performance in the World Cup of 1981 in Argentina where the Soviet shooters have won four (!) gold medals, one of them — in a team championship at the trench stand became a noticeable event in sports life. A. Asanov became the world champion at the trench stand.

Today the Trench stand has the form of a rectangular site 25 m wide and long 22 — 24 m. Ahead on all width of a site the trench in which on the special base throwing machines, on three on each of five shooting numbers are installed is equipped. In each group of the machine provide a throwing a misheniye to the right, directly and to the left, with a deviation in the parties to 45 degrees, and on height — from 1,0 to 3,5 m, on range to 85 m. In 10 and 13 m from a trench on all width of a site put lines for firing from approach, and in 15 m shooting number for firing about “places” which connect a two-meter path is equipped. About each number the microphone providing giving of a target at the command of the shooter is installed.

Political events of 1991 and the followed economic shocks have struck serious blow to shooting bench sport. In the Olympic Games 1992, 1996 and 2000 of the Russian athletes some significant victories did not try to obtain. It is necessary to celebrate a successful performance of P. Gurkin (BOO) in the World Cup of 2001 where he has taken the 3rd place. On the World Cup of the same year in Seoul A. Alipov has declared himself, having taken the 3rd place. And only at the Olympic Games of 2004 in Athens a bright asterisk the beautiful victory of A. Alipov at the trench stand has broken out. Its result — 149 targets from 150 possible.

The powerful contribution to the general moneybox of victories and medals of all levels of advantage was brought also by our female sportswomen: V. Gerasina (BOO) the first woman — the world champion, 1962, Yu.Klekova (BOO) and others. In new century our women have made significant progress. In 2001 in the World Cup in Cairo I. Laricheva (BOO) became world champion and has won a gold medal. On the World Cup same year in Seoul E. Tkach has caused a stir. It became the first among women with result of 97 struck plateaus from 100 possible.

It should be noted that throughout all history of bench firing conditions and rules of competitions became complicated. The international federation of shooting sport has developed new rules on the forthcoming four-year preolympic cycle which have begun to work since January 1, 2005. So, at the trench stand in exercise for men from 150 targets, and for women from 100, in the sixth (at women in the fourth) a final series it is fired by one boss. New rules will demand from the Shooting Union of Russia (SUR) and trainers of new approach to justification of classification standards and a training cycle of athletes to the forthcoming international competitions, and especially to the Olympic Games-2008.

Such is history of emergence and development of the trench stand from the first firing practice on “cages” at pigeons before the Olympic Games-2004.

Victor Gurov, MS of the USSR on bench firing, Hunting and fishing the 21st century 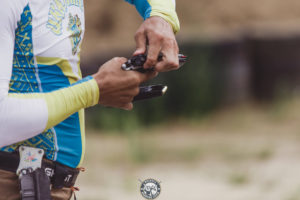 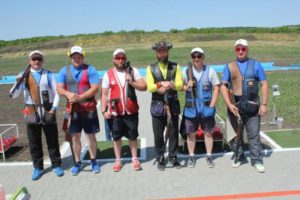 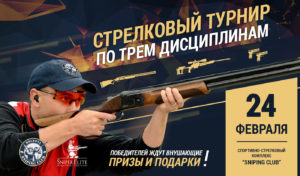 Shooting tournament on the occasion of February 23

Sniping Club invites to participate in a shooting tournament 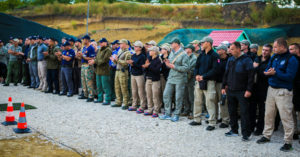 The best bodyguards of the world have shown skills of firing

In 2017 Moldova had had a great honor to hold the World Bodyguard-2017 championship.